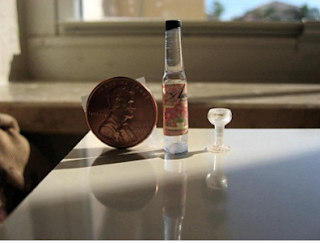 This is a DIY approach to making bottles/jars and glassware at a fraction of the cost for purchased items. I made these from 1/4" clear Lucite rods.

They cost about 10 cents per foot so in 1:12 scale; a wine bottle will cost less then one cent and wine glasses much less than that.

CAUTIONS: Lucite will melt when too much heat is generated. The scraping edge of the scrapers must be nick free (any nick or groove will result in the area being scraped to have a ridge or valley which will prove very, very difficult when the "haze" is to be removed). Do not be tempted to use sandpaper (it generates too much heat and is difficult to control in the scraped area). Have the variable speed drill rotating at no more than a few hundred RPM or too much heat will be generated.

PROCEDURE: I secured the variable speed drill to the work table, on its side, with the C clamp.

Cut off a 1 - 1/2" length of clear Lucite rod with the razor saw. I did not have to go completely thru the rod; I simply cut about 1/8 into the rod and it snapped cleanly at the cut line. I chucked about 1/2" into the 1/4" variable speed drill chuck. 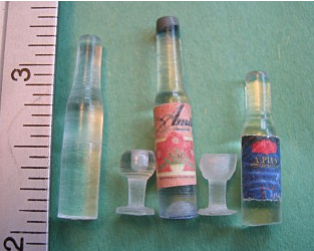 Using the ruler, I sketched the mini bottle on to paper and placed the required measurements on the sketch. Using the calipers, I was able to transfer these measurements to the "blank." Start all scraping from the free end of the "blank." I found that Lucite is more forgiving then wood and can be scrape turned to very thin diameters, (3/32") as in the stem of the wine glass or neck of the wine bottle.

Scrapers can be anything that is about 1/8" on the scraping edge. Very fine chisels or mini screw drivers do nicely. I found that when scraping, the Lucite comes off as a cotton-like substance but clings to the scraping edge and very often I had to remove the scraper and clean off the Lucite scrapings. This affords the rod chance to lose some of the heat generated.

All this scraping creates a "haze" which has to be removed to return the Lucite back to its original clear condition. This is done while the Lucite is rotating in the chuck. Some of the fine abrasive is put onto the soft cloth and applied to the rotating Lucite. A clean portion of the rag is employed to remove the dried abrasive. Repeat as often as needed to obtain the translucency of the original Lucite. 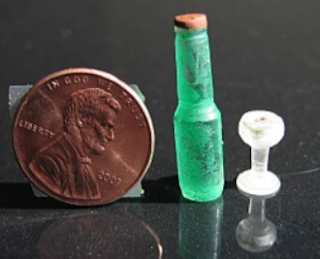 The razor saw is used to remove the bottle/jar or glass by holding the saw teeth against the rotating rod at the point of removal. Labels, if needed, are applied to the blanks.